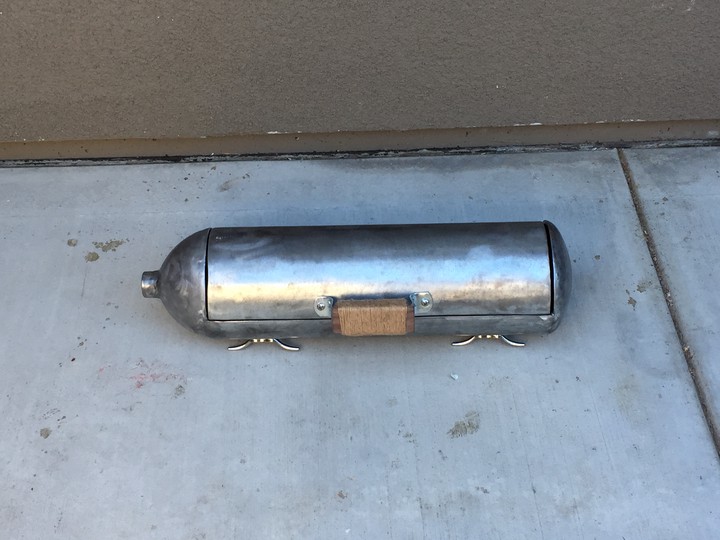 This is my first scuba grill! Let’s first cover the basics:

The inspiration for this project begins after purchasing several scuba tanks in 2017 and discovering that one of them had corroded internally making it far too expensive to repair and effectively dead weight. I decided that instead of throwing away the tank, it may be worth while investigating a new use case for it. It seemed like the perfect shape for a small grill!

My first step was to find any existing public projects that were similar. One (possibly fake) exists on Pinterest1 that seemed quite reasonable to build and one on YouTube2 that was more legitimate but far to extravagant for my metalworking skill.

So I went to Home Depot and purchased a cheap wheel grinder and set of diamond metal cutting blades and proceeded to cut open the tank into two pieces: lid and bottom carriage. Cutting through the steel wall of the tank precisely was quite difficult and required a couple of hours of intense labor.

After visually identifying the corrosion inside and attempting to clean off the rust with a wire wheel, I was left with a black film that is visible below.

Reading through the fabrication process of scuba tanks and looking through forums on the potential safety issues with using a scuba tank as a grill (metal toxicity, etc)3, I couldn’t find any definitive information identifying this black film. It would wipe onto a rag, however I couldn’t manage to remove it with even the most vigorous wire brush scrubbing. Initially unable to remove it effectively, I decided to proceed with the project and deal with the film later.

Use Steel parts vs Aluminium when dealing with high heat.

My next step was to secure a suitable handle, fasteners, feet and grill grate. I used Stainless Steel (for heat/corrosion resistance) when available and preferred Steel over Aluminium due to the known toxicity of Aluminium in high heat environments. Fortunately, Home Depot once again had everything I needed!

For the handle I bought a trash-can-style handle4 that was Zinc-plated. I figured Zinc-plated isn’t ideal but okay since this part would never contact the food.

For the feet I found chrome plated rope cleats5. Even though these aren’t stainless steel, I figured that they would never contact food and likely not get too warm since they would reside underneath the grill.

I decided that the handle would need to have an aquatic theme and so hammered out its crease and wrapped it in twine bought from a JOANN Fabrics and Crafts.

I then briefly revisited the unsightly black film and once again tried to remove it with heavy wire brushing and wheel grinding but to no clear avail.

I put the black film removal on hold once more and pressed ahead with construction. My next step was to find a suitable grill grate. I wanted to avoid welding or heavy custom fabrication so looked around for one. Once again, Home Depot came through6 with one that was fit perfectly and was even adjustable! The grill grate rests nicely on the nuts of the handle and hinges, providing just enough room for coal briquettes underneath it.

I’m quite pleased with the result!

The last remaining item to check off is the removal of the black film. I’m not entirely sure if it’s a reactive effect of the metal or a liner that was provided for the tank during fabrication. In any case, I think removal is likely necessary to avoid toxic food contaminates. After having failed at grinding/brushing off the film, I lit a fire in the newely completed grill. My next step will be to attempt to grind/brush off what is remaining from the fire. If this fails, then my last resort may be to sand blast off the film.